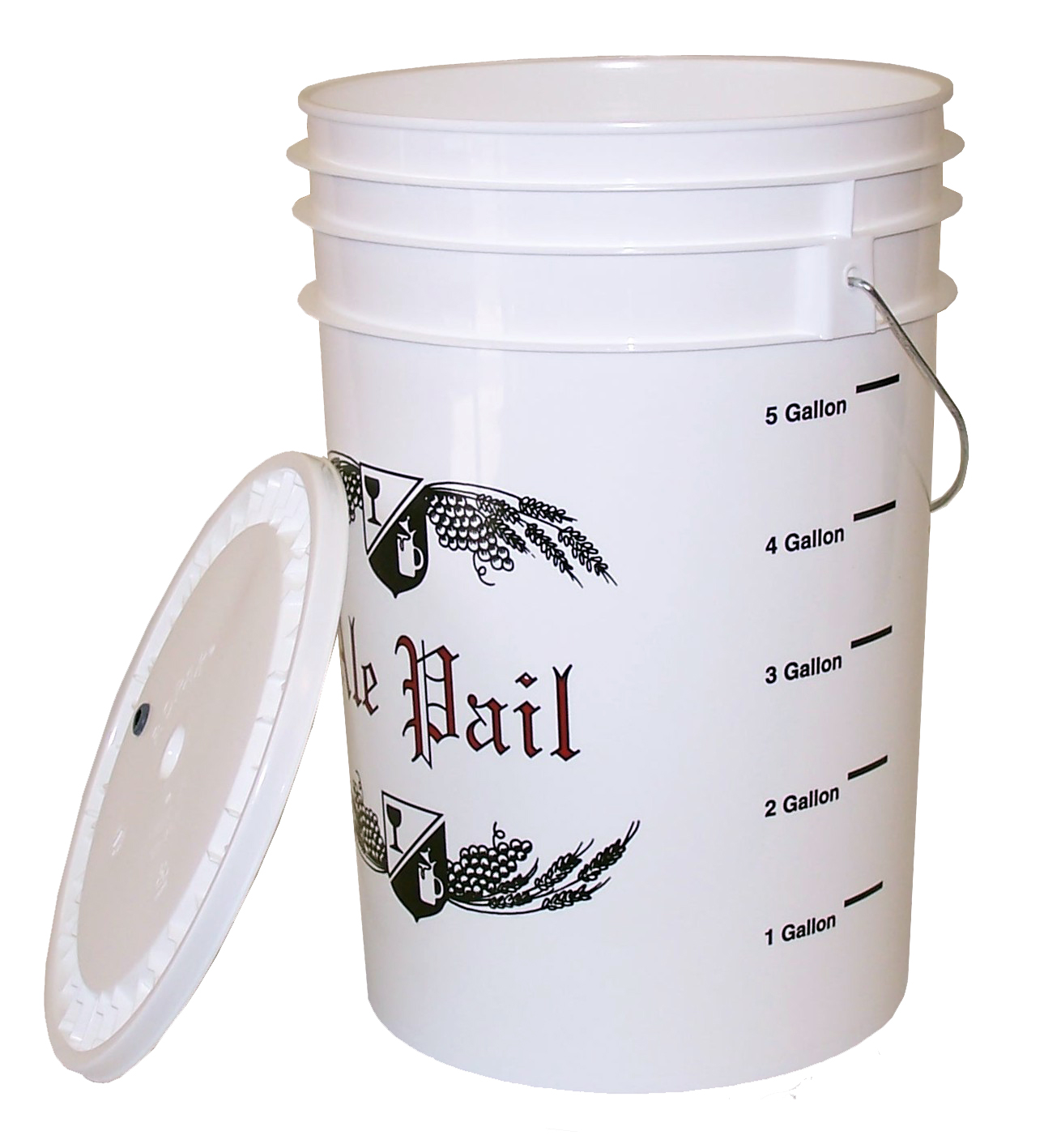 I never really questioned the 5-gallon standard prevalent among homebrewers.  That’s the size of the first kit I bought, and beyond doubling to 10 gallons every once in a while, I never tried out different batch sizes.  The 5-gallon standard is a standard for a reason.  The volume fits in readily available 6.5 gallon food-grade buckets and in 5-gallon glass or plastic carboys.  It also makes 2 cases of beer or completely fills a corny keg.

I’ve heard a lot about people brewing almost exclusively small, 1-gallon batches.  I’ve been intrigued for some time as to the allure of small batch brewing.  So when I received a gift for a 1-gallon brew kit from Brooklyn Brew Shop, I was excited to try it out. 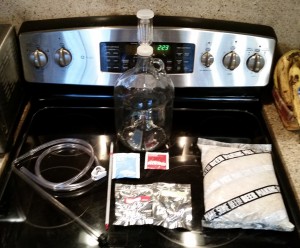 The kit came with a 1 gallon glass fermenter, airlock, tubing, thermometer, tubing clamp, and sanitizer.  I was surprised that the kit was an all-grain recipe wother 2.5 lb of crushed grain.  I assumed most beginner’s kits are extract kits.  But I guess their rational is the batch size is small enough to mash in a stock pot. 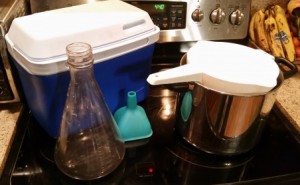 Beyond what came with the kit, I needed a few extra items.  I decided to forgo the stock pot and used a small cooler as my mash tun.  I used an Erlenmeyer flask to measure the water, a strainer for straining the wort from the grain, and a stock pot to boil the wort.  I also grabbed a funnel for transferring wort into the fermentor.  Besides the flask, all these items are laying around most kitchens, and should make it easy for anyone to just whip up a small batch of beer with no need to invest in brewing equipment.  So far, this small batch brewing seemed like a great idea.

I mashed for an hour per the instructions, and strained the wort into the pot.  Apparently the cooler was not designed to pour liquid, and I created a mess by having wort stream down the side of it.  Not pleased that I lost some of my first runnings – strike one.  Especially since the total volume I collected was just over a half gallon.  At this scale, every ounce counts.  After cleaning up my mess I returned the grain to the cooler and batch sparked with another half gallon of water.  Again, transferring and straining the wort proved messy.  Nonetheless I got (almost) everything transfered.

At this small scale and without the use of a false bottom, there really is no way to vorlauf.  So the wort you collect is a cloudy mess.  I tried to strain the wort back through the grain bed in the strainer, (per the instructions), but that did not clear up the wort – strike two.

Nonethless, I proceeded with the boil, added the 4 (yes 4) Columbus pellets, followed by the finishing hops.  After chilling the wort, I transfered it to the 1-gallon jug. 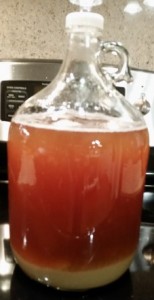 The instructions say to fill to 1 gallon, but I left a little bit of headspace as I expected the yeast to foam.  However, even reducing the headspace some did not protect me from an overflowing mess – strike three.

After a couple days the foaming subsided and only lost a little beer.

When it was time to bottle after a couple weeks, I got to thinking if I really wanted to go through the hassle of bottling.  I had about 110 to 120 oz of beer/yeast cake.  I figured I would recover about 90% of the beer, thereby leaving me with 100 oz or about 8.5 bottles.  Was it worth the hassle of sanitizing 9 bottles and caps; dissolving, boiling, and cooling the 0.5 oz priming sugar; then filling the bottles that inevitably results in a sticky floor?  No, not for 8.5 bottles of beer.  I opted instead to transfer the beer into 2 2-L bottles and for carbonate from my kegging system.  Much simpler.

Overall I’m glad I tried small-batch brewing.  At least now I know what I’m not missing out on.  The amount of effort to brew 8.5 bottles of beer was not much less than to brew two to four cases of beer.  I can see this being an alternative way to make beer if you’re in an apartment, space is tight, and you’re stuck brewing on an electric stove.  But even then, it’s a lot of work to make a beer that you and a buddy could go through in a single evening.  Personally, I’m sticking with the 5-gallon standard.