In my previous post I introduced the brewing project to analyze Saccharomyces eubayanus as a brewing yeast. After collecting all of the data, they were analyzed using a concept known as design of experiments (DOE). Without delving into theory, the effects of multiple factors (e.g., starting gravity, mash temperature, mash time) on an output (e.g., attenuation) can be easily analyzed. Rather than analyzing the 10 different starting gravities (e.g., 1.025 to 1.070) mashed at eleven temperatures (e.g., 145-155°F) for three different times (e.g., 60 min, 90 min, 120 min) for a total 330 mashes, conditions can be randomized for a smaller experimental set, say 20 mash conditions, to generate a statistical response model to predict how these variables interact.

In total, data from 49 beers representing 25 beer styles were submitted and analyzed.

While this experiment might be criticized for having too many uncontrollable variables, I argue that having the uncontrollability of multiple brewers actually helps control the entire experiment. If a trend emerged for a particular output, perhaps a phenolic flavor for example, definite characteristics of the yeast can then be made. Further, the performance of the yeast would be evaluated in real-world brewing scenarios, thereby demonstrating its practical utility as a brewing yeast.

Factors that impact attenuation were analyzed by first separating entries based on whether the brewers used malt extract or performed an all-grain mash. Eight beers were brewed partially or entirely with malt extract. Excluding a single outlier with 29.6% attenuation, the mean attenuation of these beers was 61.8% +/- 7.3%. Only one of these had fermentables from a mini-mash (6.2% Munich malt steeped at 150°F), and this had no noticeable effect on attenuation. No correlation could be made between the fermentation temperature and attenuation as the beer with the highest attenuation (74.5%) fermented at 70°F and the beers with the lowest (50% and 58%, again discounting the 29.6% beer) fermented at 67°F and 68°F.

In the model, fermentation temperature had a borderline impact on attenuation. While an early report showed S. eubayanus does not ferment or grow very well at 72°F (1), a recent paper demonstrated that not only does S. eubayanus grow and ferment up to at least 86°F, at 68°F it grows and consumes sugars faster than S. cerevisiae (2). The data from these beers support the latter observation where multiple brewers demonstrated attenuation >80% at temperatures above 68°F. Both reports were in agreement that S. eubayanus grows well at low temperatures, and consistent with these reports, attenuation as high as 70% was seen by multiple brewers at 50-54°F.

In summary, S. eubayanus requires a wort produced from a low temperature mash containing few specialty malts to achieve high attenuation. The fermentation temperature had little impact on attenuation, allowing brewers to ferment over a wide range of temperatures.

In addition to generously providing us yeast, White Labs also performed chemical analyses of the beers to determine the level of various flavor and aroma compounds in the beers. The data for all beers were plotted and the mean value for each compound was determined (Figure 2). Fusel alcohols (1-propanol and isobutanol) were very low. All but three beers had levels of amyl alcohols we 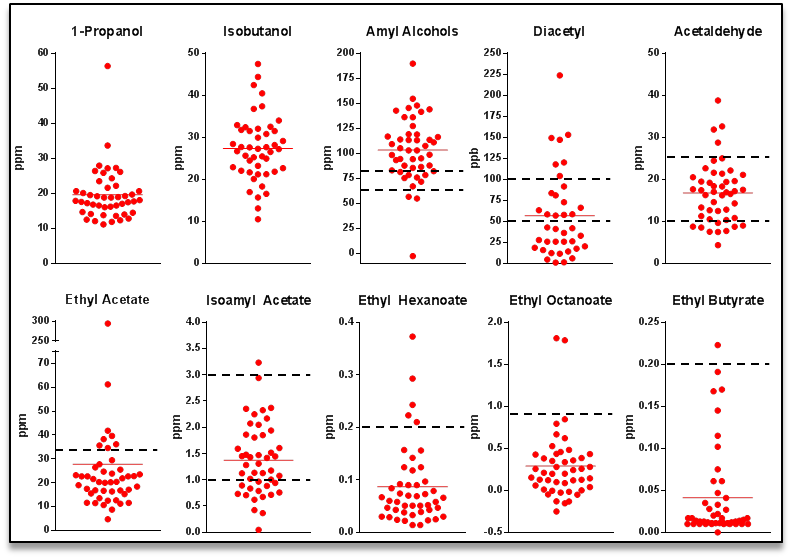 ll above the flavor detection threshold, which may account for the white wine-like flavors and aromas prevalent in a lot of the beers. A majority of the beers also had detectable levels of diacetyl. Acetaldehyde hovered between the range of flavor detection thresholds, and may have contributed to the apply flavors in the beers. Surprisingly, the levels of ethyl hexanoate and ethyl octanoate were below the threshold of detection in most samples, as these typically contribute to fresh-apple flavors. Perhaps S. eubayanus produces apple-like esters not typically produced by S. cerevisiae or S. pastorianus, and are therefore not part of the panel of compounds analyzed in beer. Ethyl acetate was detectable in most all beers. One beer in particular had an extreme level at 294 ppm. This beer was also the lowest scoring beer, and was described as cidery and astringent. The levels of isoamyl acetate were on the low end of detection, and likely contributed to some of the fruitiness, though no beer had an overt banana character (a large criticism in the Hefeweizen category). Ethyl butyrate was for the most part well below the threshold of detection. 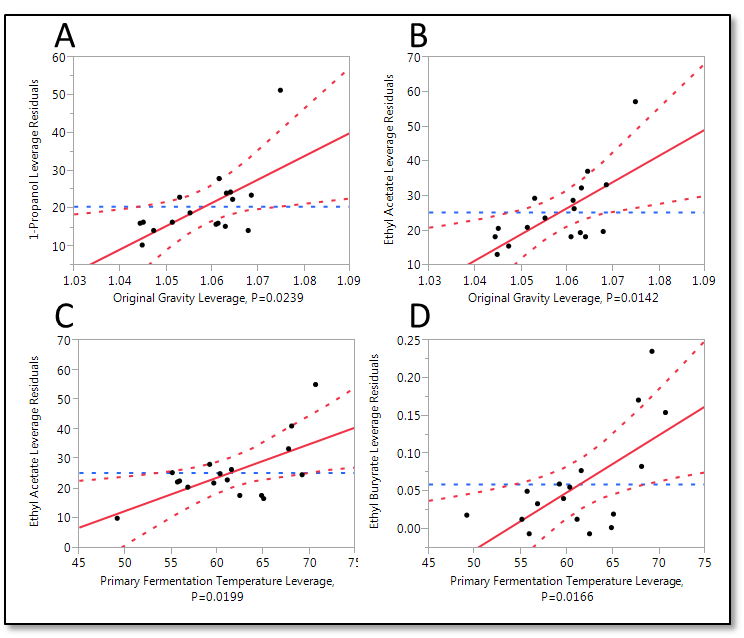 The mean values for each compound were compared to those published by Gibson et al. (1) and Mertens et al. (3) (Table 2).

Overall, the data were consistent. These groups demonstrated that compared to S. cerevisiae and S. pastorianus, S. eubayanus produced similar or less amounts of acetaldehyde, and these levels were similar to the beers in this study. They also found similar amounts of higher alcohols (1-propanol, isobutanol, isoamyl alcohol) between the three species of yeast. The beers in this study, however, had much greater levels of amyl alcohols than what these groups reported. The levels of ethyl acetate, isoamyl acetate, and ethyl butyrate were similar between yeast in all of the studies. Gibson et al. reported the esters ethyl hexanoate and ethyl octanoate were 0.2-0.3 ppm higher than S. cerevisiae and S. pastorianus. However, the levels in our beers were similar to those seen in S. cerevisiae and S. pastorianus.

Continue reading for results of the beer judging.