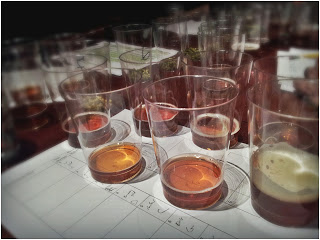 Last night a couple guys from my homebrew club put together a nice tasting comparing different English hops. They made a simple bitter with Maris Otter and some crystal malt and single hopped 3 gallon batches to about 50 IBU at 60 and 10 min with 0.25 oz at flameout. It was a great way to taste how different and similar these hops are (without doing any work). Up for comparison were East Kent Golding, First Gold, Brewers Gold, Glacier, Challenger, and (to mix things up) Nelson Sauvin.  The tasting was done blind, and cups of each hop were also provided for reference. This was a great format to form an unbiased opinion of each hop.

The easiest hop to pick out was the Nelson Sauvin. It tasted nothing like the rest – and I don’t mean that in a good way. I can hands-down say I hate this hop. It tasted like cat urine-soaked newspaper. Horrible.
I very much enjoyed the Brewers Gold. It had a smooth and pleasant bitterness. The flavor and aroma were noticeably grassy with fresh-cut hay and a little bit of spice. It was not overpowering, and I think it would be perfect in an English IPA.
Challenger came across very grassy/hay-like in the aroma and finish. It had a nice bitterness, but the flavor was a bit too harsh. I think if the amount of hops at 10 and flameout were cut in half, it would be much better. Personally, I would use this only in bittering.
East Kent Golding was the most clean-tasting hop of the bunch. It was mildly spice, slightly earthy with some possible hints of black currants  It’s no wonder that almost 300 years ago it was remarked “that the Kentish Hop is equal to, if not exceeds all others.” (The London and Country Brewer, Part II, 2nd edition, page 47, 1736)
I found First Gold to taste almost identical to EKG. It had a little brighter flavor than EKG with a little more grassiness. But if I were to taste them separately, I could not tell the difference. Very good.
Glacier was my favorite of the evening. This was also very similar to EKG with some slight spiciness/earthiness, but it also had a bit of orange-citrus flavor that became more pronounced as it got warmer. The citrus was much more balanced and mild than the citrus flavor of American hops. Very good and very smooth.

While I was tasting these, I kept asking myself “How would I uses this hop?” They all were very good bittering hops, but I think the Brewers Gold, First Gold, and EKG make very good bittering hops since they all have a very smooth flavor even when added at late additions. There was no vegetal flavors or harsh hops bitterness in any of these samples.

Any of these three would make a good English Barleywine, as they provide a low flavor profile that would let the maltiness shine through, while providing a firm bitterness to balance any malty sweetness.

The Brewers Gold inspired me to make an English IPA. The spiciness and hay-like flavors would be perfect to add that English Hop character to an IPA.

I think I found a new favorite hop for English bitters. While had the classic English hop spiciness/earthiness it also had a nice citrus flavor to give something extra to an “ordinary” ordinary bitter. I think using this at 1 oz at 10 or 15 min and another ounce at flameout will give a bitter a nice, pleasant hop profile.

I highly recommend taking several similar hops, making some single hopped beers, and tasting the differences. It’s a great way to really understand what exactly the hops are contributing to your beer.