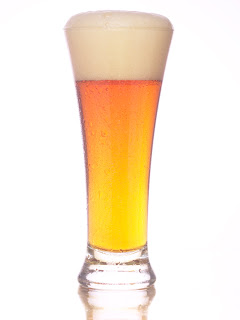 Since I acquired a refrigerator from a neighbor I had been meaning to finally brew a lager. I had been putting off making one for some time, as brewing one can make brewer feel very vulnerable. There is your beer with nothing to hide any flaws. No roasted barely to counter balance any residual sweetness. No ale yeast to blame excess fruitiness. No excessive happiness to bury a poor malt backbone. It’s just you and your brewing techniques on display.

Feeling somewhat daunted, I enlisted the help of a master lager beer, Mark. We decided on a brewing 10 gallons of a German pils, then splitting the batch, hopping each differently. Both would be buttered with Magnum, but I would use Hersbrucker for flavor and aroma, and Mark would use Spalt. With a recipe in hand, I entered the seemingly elusive world of lagering.
The grain bill was pilsner malt with a touch of CaraPils. Since my water has a little bit of residual alkalinity, we added some acidulated malt to drop the calculated mash pH to about 5.2. Notice I said “calculated”. After adding the water, the mash temperature was perfect at 148F. This looked like it was going to be an easy one. Then we got out my pH meter. “Hmmm, 3.5 seems a little low.” Fortunately Mark brought his as well. Mine is a cheap $7 meter from Amazon. I had calibrated it at work, checking it against a real pH meter, and it was pretty good. But we got out Mark’s super fancy meter because my cheap pH meter had to be wrong. There couldn’t have been a miscalculation. “3.5”. Well, at least my pH meter works.
We reasoned that a low pH isn’t anything a little baking soda can’t fix, and a half tablespoon into 8.5 gallons of water plus malt sounded about right. After a good mixing, the pH had indeed risen – to 6.5. That couldn’t be right, and thought perhaps it wasn’t fully dissolved. We let it sit for about ten minutes, stirred and reread it. Still 6.5, are you freaking kidding me? Fortunately I had purchased lactic acid. Since just a little baking soda raised the pH so much, we slowly added 1 mL, stirred and reread. No change. We did it again. A little change. Then again, again, again, you get the idea. Finally, after an hour of this we hit 5.4. We did a starch conversion test, and dispute the screwy mash pH, everything converted. We drained the first runnings, added slightly acidified sparge water, and batch sparged.
After a thorough mixing of the first and second runnings, the wort was equally divided, boiled, hopped, and cooled. At least this part went smoothly. I kept my portion in my fridge at 55F overnight to cool the wort even more. The next day I pitched, set my fridge to 45 F, and let this ferment.
After a few weeks, fermentation had significantly slowed down, and i ramped up the temperature to 60 F for a diacetly rest. After a few day, I performed a diacetyl test. I took a small amount of beer, and divided it into two cups covered in foil. One was heated to 155 F for fifteen minutes, after which I removed the foil and smelled. Definite diacetyl. We used WLP838, which apparently throws off a lot of diacetyl. I let the beer at 60 F for a few more days, and tested it again. Still diacetyl. After a week, I tested it again. It was faint, so I left the beer at 60 F for a few more days. This time there was no diacetyl (and it tasted pretty good as well).
I racked to my keg, and moved it to 32 F for lagering. After a couple weeks I began carbonation. The yeast settled out after a couple weeks, and I pulled that off through the tap. It’s been two and a half months since brew day, and I can say the beer is quite good. It’s crisp, bitter, and refreshing. Comparing Mark’s beer and mine, I can say that the Hersbrucker I used gave mine a distinctively different flavor. It’s more floral, and some slight vegetal undertones.
Overall, I think the beer was a success. I’m not as bad of a brewer as I feared I was, and it turns out that lager brewing isn’t too much harder than brewing ales. As a wise man once said, “The waiting is the hardest part”.
Add comments