After all of the data had been analyzed, I came up with these basic recommendations for brewing with S. eubayanus. 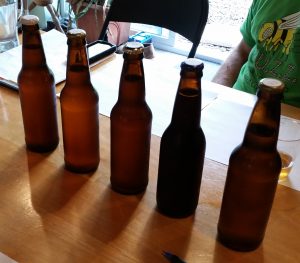 S. eubayanus is a tricky yeast to work with and not for the faint of heart. Many of the brewers were turned off to using it again because their beers did not turn out as well as they expected. And I don’t blame them. We were in uncharted territory as how to best use this yeast and explored the unknown limits of S. eubayanus can do in a beer. Personally, I see a lot of potential to make interesting and unique beers with this yeast, and plan to continue experimenting with it. For anyone else up to the challenge, here are my recommendations when crafting a recipe:

• Keep it simple at first. First, brew a pale beer with no hop character so you know what flavors the yeast produces. Then create your recipes around those flavors.
• Mash low, but not too long. While very high attenuation was seen after a 5-hour mash, the beer was horrible. I suggest mashing between 145-150°F for 60 to 90 minutes.
• Keep the roasted malt restrained. The phenols clash with high amounts of roasted barley. Pale chocolate and Carafa seem to work well.
• Test different fermentation temperatures for nuances in ester and phenol production. While the yeast performed well from 45-72°F, and beers scored well fermented at all temperatures tested, the differences between the runner up and second runner up beers fermented 50°F and 60°F, respectively, were significant enough to result in a 6-point difference in their score.
• Add some sugar. This should help dry the beer out by increasing attenuation.
• Choose your hops wisely. Be mindful of the low attenuation and compensate by increasing the IBUs. For flavor and aroma hops, be cautious. Not all hops paired well with the yeast.
• Add another yeast. Use a clean ale or lager yeast to help dry out the beer without affecting the characteristics of S. eubayanus. Alternatively, I suspect that adding a little Brettanomyces will create a fantastic beer. The Brettanomyces will consume the unused maltotriose, and the esters some strains produce may nicely complement the apple/pear/grape flavors S. eubayanus produces.