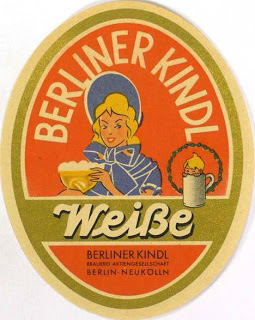 I decided to be a little creative when making my most recent lager yeast starter. I am going to be co-brewing an 11 gallon batch of German pils, and this requires a 2 gallon starter using my starter system. It seems like a waste of beer to just dump 2 gallons of starter down the drain, so I decided to make a low gravity beer as my starter instead. I have been meaning to make a berlinerweisse for a while now, and this seemed like the perfect excuse to try it.

A berliner weisse is a low alcohol, clean, sour German beer. The low alcohol is perfect for making a starter – the yeast won’t be overwhelmed by a lot of sugars and alcohol. Berliner weisses are also lightly hopped at 2-3 IBU, so there are little hops to impair the health of the yeast. And this is a clean German beer, so I can get away with using a German lager yeast instead of the German ale yeast. The only tricky part is the souring.
Souring a beer can be achieved a number of ways. You can cheat, and add lactic acid post fermentation. A substantial amount of acidulated malt in the mash will also sour a beer. However, authentic souring of the beer comes from fermenting with lactobacillus. This, too, can be achieved a couple ways. The simplest method is to co-pitch pure cultures of lactobacillus and yeast. In addition to limiting the control of sourness, a major disadvantage of this method is that lactobacillus will be coming in contact with all of your fermentation equipment. I find that a more controlled and cleaner approach to producing a sour beer is by performing a sour mash. The wort is soured prior to boiling by one of two methods: 1) mashing and cooling to around 100F, tossing in a handful of unmilled grain, and leaving it for several days, 2) after mashing and sparging, cooling the drained wort to about 100F and adding a handful of grain, leaving the wort to sour for a few days. The lactobacillus present on the unmilled grain will begin fermenting, thereby producing lactic acid. Alternatively, a pure culture of lactobacillus can be pitched into the wort instead of unmilled grain. The latter method provides better control over souring the wort, as you don’t have to worry about other bugs present on the grains potentially infecting the beer. After souring by whatever method, the wort is boiled to kill off the bacteria and yeast is pitched. The level of lactic acid can easily be controlled by tasting the wort throughout souring process, and boiling it once the desired level of acidity is achieved.
For souring this beer, I opted to do a sour mash by soured the wort for a few days, followed by boiling. This will keep bugs out of my system and give me clean yeast for the pils. I opted to forgo using a pure lactobacillus culture, and instead made a sour starter as detailed in Funk With Less Fuss from the March/April 2011 issue of Zymurgy, like I did for my Elysian Ale. In short, I added a handful of unmilled grain to 1 quart of sugar water (1.032) and kept at room temperature for 4 days. Very simple.
For the wort, I skipped the all-grain brewing for this one, and just used wheat LME and DME. I added 3.3 lb LME and 1 lb DME to 3.5 gallons of water, and boiled for a couple minutes to sanitize. I added this to a sanitized cooler, and added a gallon of cold water to drop the temperature to about 100F. I then added the sour starter to the wort. To inhibit the growth of acetobacter and other aerobic bugs, and to promote the growth of the lactobacillus, I purged the cooler with a blanket of CO2. You could also just put a layer of plastic wrap on the surface of the wort, similar to how sauerkraut is made. I wrapped the cooler in sleeping bags to further insulate it. Over the next couple days I added boiling water to raise the temperature to stay in the 90s. However, since this was kept in my basement, my attempts to keep the temperatures constantly high were not very successful. In all, the wort soured for six days. It smelled very acetic and lactic. It reminded me of sauerkraut – not very pleasant for a beer. But, all this will be cleaned up by the yeast.
After souring I drained the wort (5.5 gal) from the cooler, I heated the wort and added enough DME to bring the gravity up to 1.033. I boiled the wort, and added 2.9% AA Hersbrucker for 30 min to yield ~3 IBUs. I pitched a 1 L starter of WLP838 Southern German Lager Yeast, and fermented in the low 60s F.
After a week, I transferred the beer to a keg, and harvested my yeast. I counted my yeast cells, and had just the right amount of yeast for an 11-gallon batch of 1.052 wort for lagering.
And the beer turned out great as well. It’s light and tart, with a slightly malty, but lactic nose. There is no hop aroma or flavor. What remains of the malt sweetness is balanced by the acidity. This is a perfect lite beer clocking in a 3% ABV. Perhaps I will play around with adding some fruit juices to it and roll out a raspberry, cranberry, peach, or whatever berliner weisse for next summer.
All in all I killed two birds with one stone. I generated the yeast I needed for a subsequent pilsner, and got a tasty berliner weisse in the process. I think I may have to make a habit of doing more starters this way in the future.
Add comments

3 Responses to “An alternative starter…”